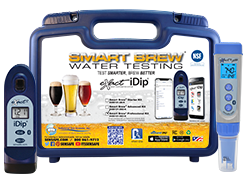 So, why does water quality matter so much in beer?

Beer was a necessity in ancient times because of their poor water quality. It is made by converting sugar water into a fermented liquid. Beer had become then, as it is today, a vital part of civilization. Some Babylonian clay tablets even included recipes for making beer dating back to 4300 B.C.!

Historians believed that prehistoric man had made beer before learning to make bread. Beer was referred to as "liquid bread."

Why should you test your water?

Many different tests are used when it comes to water. One test is for water hardness and it is used amongst different beers. Dark beers use harder water while light beers use softer water. Ever crack open a beer and think, "wow this taste is so smooth"? That's because soft water adds smoothness to the beer while hard water helps add a crisp taste.

The Smart Brew® Starter Kit will get your testing started off right with the basics. The eXact® Strips that come with the kit are Total Hardness, Calcium Hardness, Total Alkalinity, pH, Chloride, and Sulfate.

Boost up your water quality testing with the Smart Brew® Professional Kit. This will include everything in the Smart Brew® Starter Kit PLUS the eXact® pH+ Meter System! Perfect for testing your brewing water.

Run out of eXact® Strips? We've got you covered with the eXact iDip® Smart Brew® Refill Box! This package contains 1 bottle of each Alkalinity, pH, HR Total Hardness, Calcium Hardness, Chloride, and Sulfate. There's no better way to keep your testing running smoothly than the refill box.

The WaterWorks™ Propylene Glycol check tests for levels in water from 20 - 60%. The visual test strip uses a simple dip, read, and match procedure. Easier to use than a refractometer, the strip verifies the fluids are in good working order preventing damage to cooling systems.

The new eXact pH+ Meter System with Bluetooth® perfect for the detection of pH, Conductivity, Salinity, TDS, Temperature, and ORP in water. This device works in conjunction with your eXact iDip® app for iOS and Android.

No manual calculations are needed for our tests. Yep, you read that correctly. Everything is done for you right within our app! This is the first meter designed for the craft brew market that directly calculates Mg, RA, and Sodium with no math required!

Perform a test as soon as possible after collecting a water sample. If collecting samples for later testing, handle them with care to avoid contamination and seal containers tightly. Always keep reagents and/or test strips stored in a cool, dark place.

Testing water quality is important for good health and well-being. The water may have a clean appearance but looks can be deceiving. There are many different ways to test the quality of your water. Modern test kits are composed of reagents/reactants, testing vials, reducing agents and color charts. The testing process involves the operator collecting a water sample to be tested, adding reagents, and either reducing the color developed with a reducing agent or comparing the color developed with a color chart.

Take note of the temperature of the testing water (cold or hot water can affect tests). Don't interchange sample vials or cells. It's also important to follow the test manufacturers directions. Pay attention to expiration dates on reagents and test strips.